You have baked a satiating cake, crafted a breathtaking invitation, hang balloons and banners around the party area – but all these will not be appreciated if you do not have games on your child’s birthday.

Birthday parties are not complete without party games for kids. If your child is celebrating his birthday, planning out the games for the guests is essential, so that there will be no dull moments. It does not need to be expensive; no need to purchase special materials just to pull off something that will truly be enjoyed. You can make use of the things that can be found inside your home or choose ones that do not require anything without sacrificing the fun.

Games are also great icebreakers. There will be kids who might feel shy when they arrive at a party. Conducting a game will help them loosen up, they’ll start laughing and shouting as the game starts. You can start the game by choosing something that will help them introduce themselves, then move forward to something more physical, like a dancing contest or a group game.

If you have no idea what types of party games for kids should you conduct on the party, here are some amazingly easy and affordable ones that you might want to try. 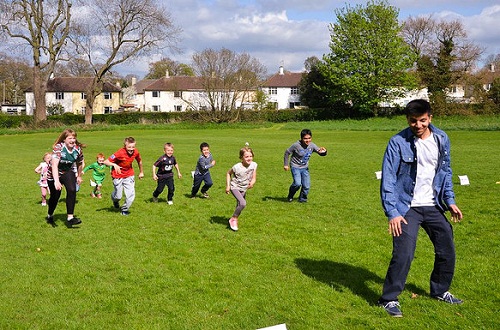 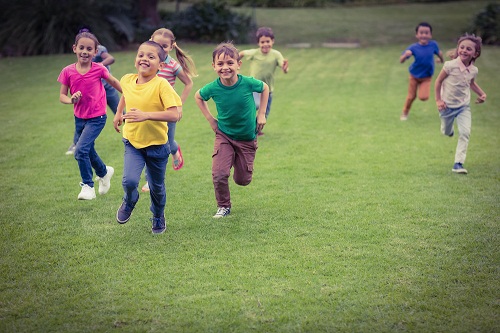 Set a candy keeper, preferably an adult who can run well. The candy keeper will hold candies, thus, the term “Human Piñata.” He will set a base which will be his safe zone. Whenever he’s at the base, no one is allowed to tag him. If he’s out, kids can tag him. When someone touches him, he’ll be frozen and the only way for him to be able to move is to drop a candy. The game will go on until the candies run out. 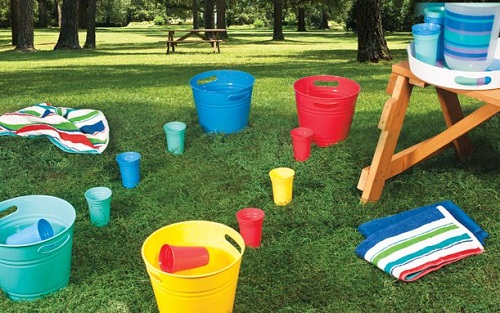 Here’s a group game. Divide the children into 2 groups. Hand each of them with plastic cups that have tiny holes under. Place 1 bucket full of water on the beginning of the line, and 2 empty pails on each team’s end. The first player will get a cup full of water from the first pail. He will pass the water to the next player’s cup and so on and so forth. The last player will pour whatever’s left on the last pail. You can set the time, either one to three minutes. The team that has saved more water wins. 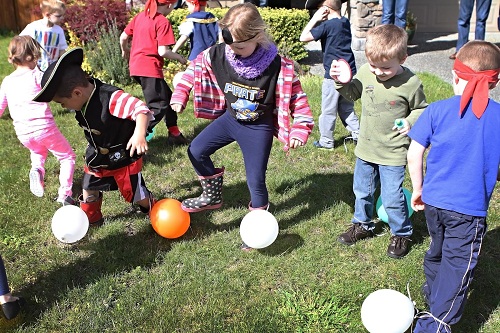 Originally posted at The Aprecio Family

Tie a balloon to each child’s foot, preferably a 5 inches away from their ankle so that other kids can easily stomp on it without causing an accident. The main objective of the game is to be able to stomp on other player’s balloons while having yours intact. The kid who has protected his balloons well will win. To add more fun, you can fill the balloons with water! 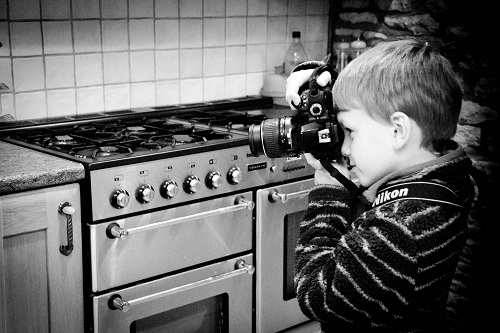 Divide the kids into 2 teams. You can either hand a camera or let each member gather different things that will represent each letter. Each item will strictly be under a single letter, like for Apple – it can only represent letter A, not F (fruit). The first team to correctly complete all the alphabets wins. To save time, make sure you let them know that the game ends after 10-20 minutes.

6. Balancing an Egg on a Spoon 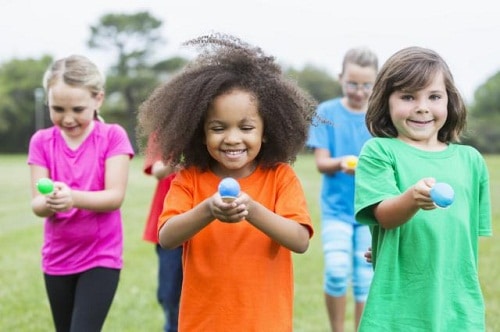 Originally posted at About Health

Here’s another relay game. Divide the kids into groups, consisting 5 players. The first player will have an egg on his spoon. Walk fast or run, he has to pass it to the next player. To add obstacles, you can place chairs in between where players need to sit, and the previous player needs to go around it before passing the egg. First to reach the finish line without breaking the egg wins. 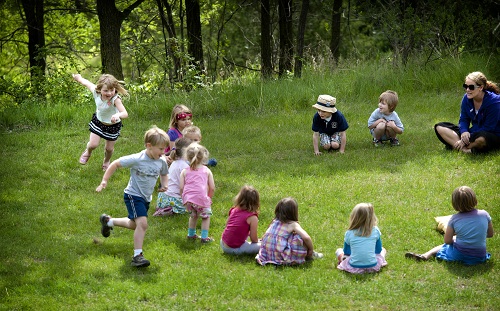 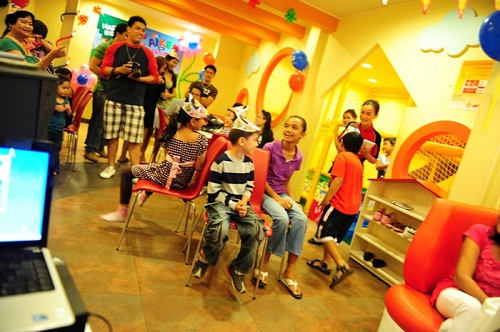 At least have 5 players. Set up 4 chairs, circularly arranged. Play a music and when the music stops, the players need to have a seat. Whoever does not have one will be eliminated. 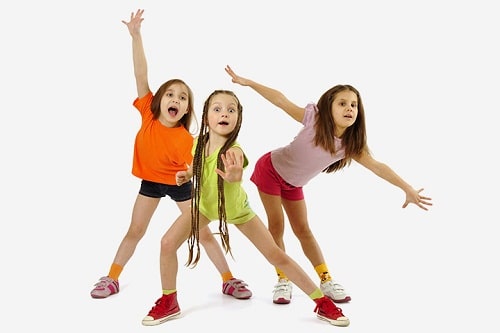 Here’s another addition to the classic party games for kids. A music will be played while the kids show how well they move. When the music stops, everyone should freeze. Whoever moves will be eliminated. 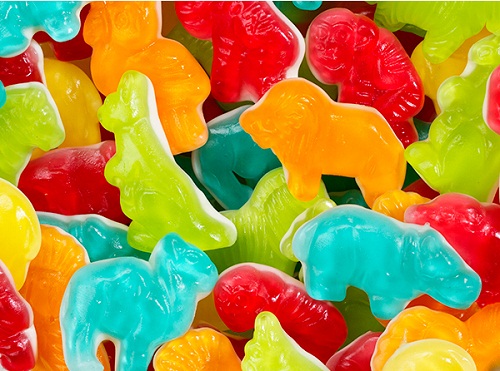 Have at least 5 players. Fill 5 bowls with different gummies. Make sure that you only have one animal per bowl. The players need to place their hands at the back. Say one animal at a time. They will have to use their mouth to find the animal you are looking for. The first one to find will have the right to eat it. Whoever finishes the bowl of gummies first wins the game. 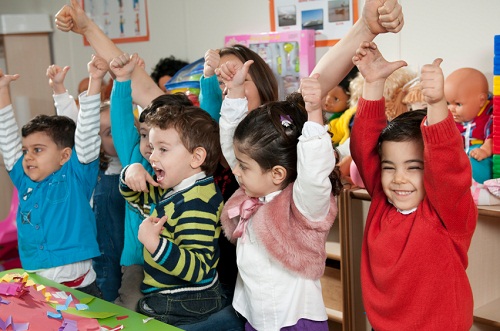 Choose a leader who will instruct the other kids what to do. Whenever the leader says “Simon says (task),” the kids need to do what he has said. If the task was given without saying the magic word and someone did it, he will be automatically eliminated. 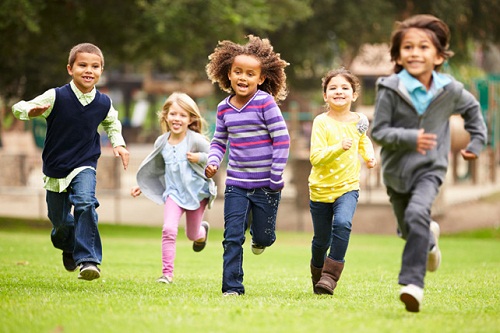 A kid will play as the monster who has to chase the others. Kids who were caught will automatically become a monster. The remaining kid will be the winner. 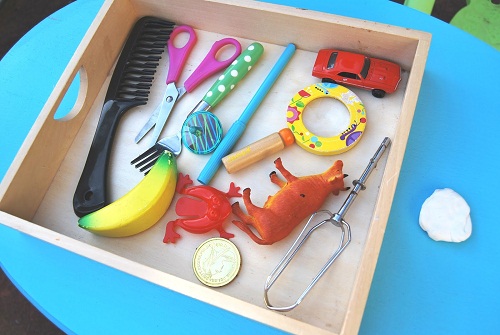 Place random things on a tray. Give each kid his own pen and paper. Let the children look at the tray for 30 seconds, then take it away. The child who will write the most number of correct answer wins. 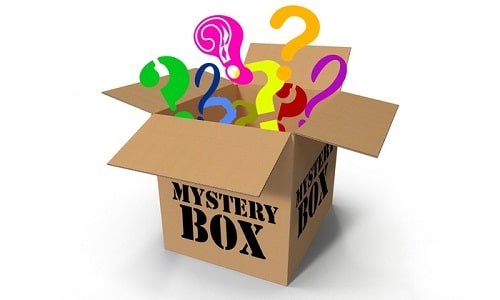 Place a random item inside a box and let each kid guess what’s inside. Whoever got the correct item remains on the game. Continue the guessing game until there is only one kid left. 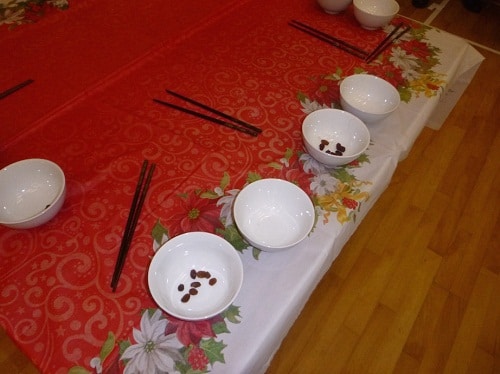 Hand each child their pair of chopsticks. Place raisins on a towel and let the child get theirs using their chopsticks. Whoever gets the most number of raisins after 1 minute wins the game. 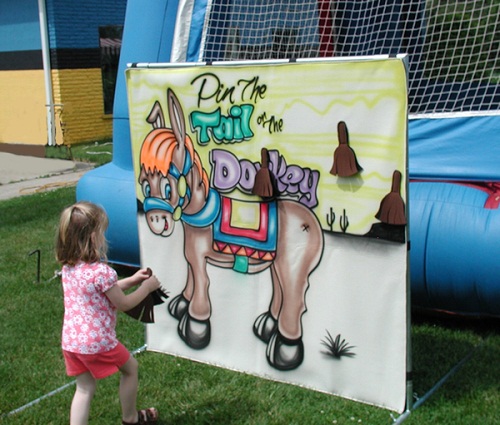 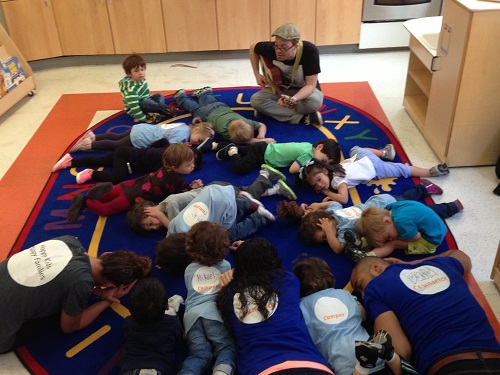 When things are getting a little bit crazy and you want to tame down the kids, play the Sleepy Lion! The children need to act like they are sleeping. You will slowly wake them out, like tickling them perhaps, until they move. 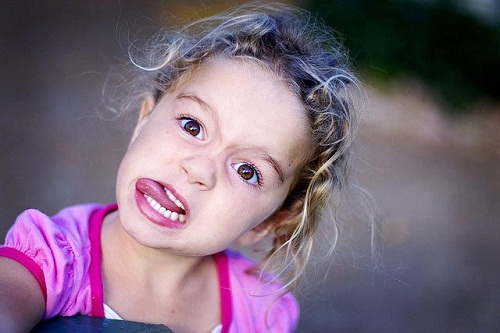 The birthday celebrant gets a chance to start the game. He/she is required to make a silly face. Whoever smiles because of what he/she has done loses the game and will replace him/her, until the last player’s left. 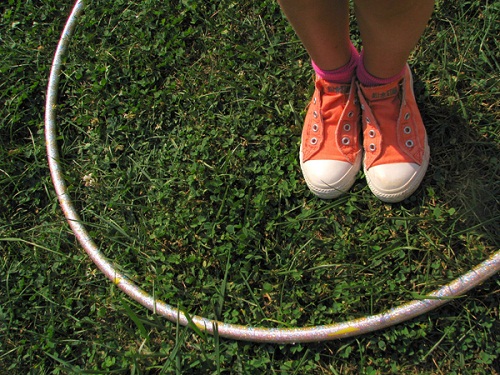 You are required to have at least 3 hula hoops to start the game. For each hula hoop, you can have 4 players at most. Play a music and once the music stops, the kids should be inside a hula hoop. Each can accommodate more than 1, as long as they can still squeeze themselves. Every round, take off a hula hoop so each game will eliminate kids. Kids who are inside the remaining hula hoop wins. If you only want a single winner, you can let them know that the last one will only accommodate a single kid. 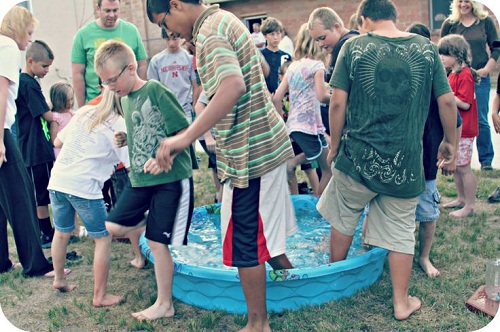 Fill an inflatable pool with water and ice (you’d like it freezing!) Add at least 20 marbles. Kids should get the marbles using their foot and transfer it to their designated cup within 3 minutes. Whoever collects the most number of marble wins the game! 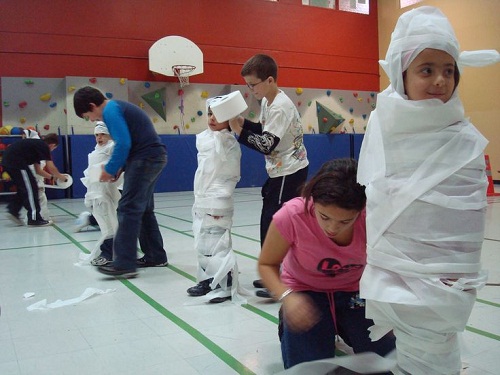 Let the children choose their partner. Hand each team with one to two rolls of tissue. One will play as the mummy while the other one will wrap him around (except his nose so he can breathe). The team that has a completely wrapped mummy wins. 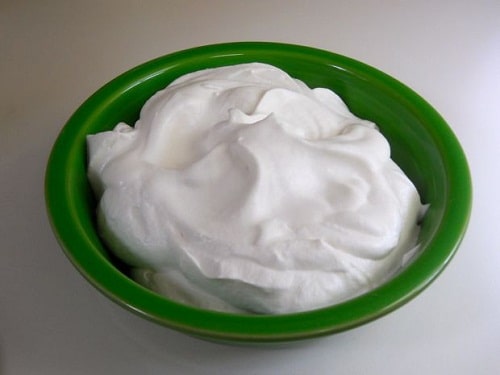 Hide 10 gummies on a paper plate. Fill it with whipped cream on top. Let the children find all the gummies using their mouth – no one is allowed to use their hands. 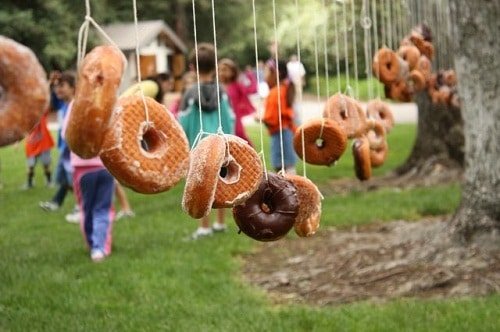 Hang donuts, just enough to still let the kids reach them using their mouth. The kids are required to finish the donuts without holding them. 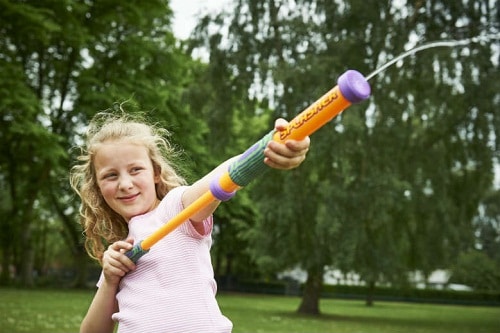 Let the players wear a white shirt. You can ask them to bring their own or you can provide them as these will be discarded after the game. Divide the kids into 2 groups. Hand a water gun filled with colored water inside. Team A can have green water while team B can use red. The players will need to target the chest area. Whoever gets a stain on the chest loses the game. The remaining player will represent the winning team. 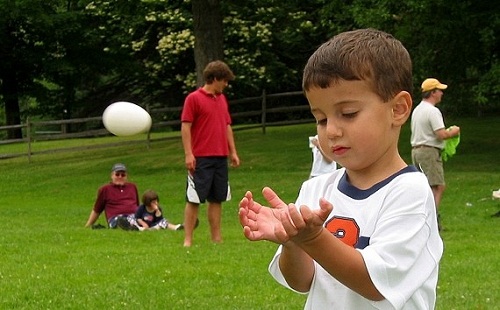 Originally posted at The Digitel 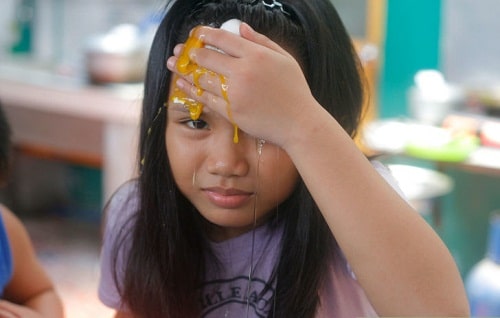 Gather 10 players and prepare 20 eggs – 19 boiled and 1 raw. Each player gets to choose an egg that will be cracked on their forehead. The person who will get the raw egg will win! 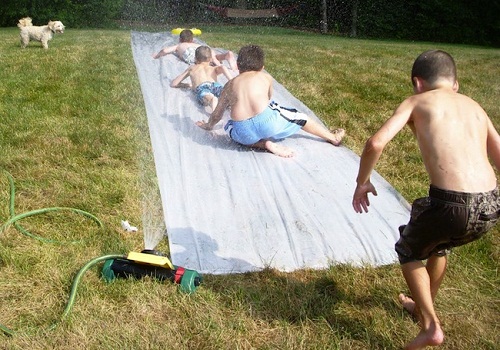 Want a bit of mess? A DIY slip and slide will do the trick. Lay a tarp or a long plastic on the garden. Add water, oil and colored Jell-O’s!

How Can I Make My Child Feel Special At Their Party?

Having some games at a children’s party is nice, but if it’s about your child’s birthday, you might want to do just a little more to make them feel special. With that said, here are a few ideas to really get them excited for his or her special day.

A fun idea is to tease them all the way to their birthday. Make an advent calendar counting down the days up until their birthday. You can place a small gift or treat under each door of the calendar to get them excited for the big gift that they will be receiving on their special day.

Normally, your kid’s birthday party only takes place in one room, but that doesn’t mean you can’t go the extra mile and decorate the entire house in a birthday themed style. With that said, you can find decors for just about everything. Yes, even the bathroom. What a way to feel special!

Give Him or Her Breakfast In Bed

It’s the small things that matter. If your child wakes up to breakfast in bed early on their birthday, they know that something special is coming up. It’s the perfect way to start the day off and make your kid feel as if he or she is on cloud 9.

It’s fun to measure your kid’s height on each of his or her birthday. For once, you get to see how they grow each year, and you can get a precise measurement at home. And you don’t even need fancy equipment. Just a classic roulette and a pencil to mark the spot on the door where his or her current height is right now. It’s that simple

Don’t Miss the Fun with these Party Games for Kids

Ensure that your child will enjoy his/her special day with all these party games for kids. Invite all of his friends and let them seize their moment as kids during the entire day. Again, it does not need to be expensive as most of the materials needed may be found inside your home.

If you still need more ideas for your child’s birthday party, you can also check out these amazing birthday cakes. You can also print out these birthday wishes and hang it in your home during the special day.

We collect the most inspiring and beautiful Birthday Wishes & Quotes with Images to send to your loved ones, friends, and family. We love DIY, crafts, and handmade products from home. We provide you with the best inspiration, tools, and reviews to create your happy home!

Most Unique Birthday Wishes For You

Most Romantic Birthday Wishes For Your Lover